Go to content
Published by Guest Writer in Health News · 8 May 2017
This is the story of the late Rui Carvalho; a former businessman, who in pursuit of medical aid for his young daughter sold his businesses and became a white Sangoma (traditional doctor) in South Africa.
Rui was the founder of Herbal Africa, a herbal capsule and tincture range of high quality herbal supplements made with potent ingredients that were created using ancient knowledge and modern day scientific studies.

How did you end up in the bush (wild, untouched areas of Africa)?

I approached Dr M. Raivoso, a Pulmonologist, who at that time was the Vice Minister of health and was in charge of the Maputo Hospital in Mozambique. His specialisation is ailments of the lungs, asthma in particular.

When I approached him, he said he could not help my daughter because my daughter was getting the best treatment possible in South Africa. There was nothing else he could do, but he knew of someone that could help my daughter.
That was strange, because as a Medical Doctor and furthermore a specialist, he was telling a friend and a patient that he could not help, but knew of someone else that could help. So, he was the one who introduced me to an Inyanga (a traditional doctor, medicine man of South East Africa). That Traditional doctor gave me a herbal treatment for asthma for my daughter.
My daughter at that time was 3 years old. Soon after taking the treatment, I noticed that my daughter was not having any asthma attacks. She is 20 now and has not had an asthma attack since.
I decided to go to the bush and learn what they were doing. If they can help my daughter, how many people can I help?
There was an interesting episode just before I went to the bush. My daughter was being observed by a medical doctor in Johannesburg. And one fine day I went to see her.
The doctor looked at me and asked me how my daughter was doing. I said, ”my daughter is fine”. The doctor replied that she noticed that I was not buying any more medication for my daughter. I replied, ”she hasn’t had another asthma attack and she does not need any more medication”.
She said that that was very strange and asked, "What happened?” I told her that I gave her herbal medication and it stopped. This doctor then accused me of child neglect.
This was an insult. She could not fix my daughter, therefore nobody else can. That philosophy is wrong. They (orthodox medicine) do not have that power, nobody gave them that power. I am doing the best for my child.

And your daughter is now fine and fully handled?

She never had another asthma attack! We used to carry oxygen tanks, drugs and nebulisers wherever we went. No more! She runs, she plays sports at school. She is a fine young lady.
Furthermore, Dr M. Raivoso in a public interview on television admitted that 96% of his patients never ever had another asthma attack after taking this herbal medicine given by that traditional doctor. That is a medical doctor, and a specialist on top of it. I rest my case. It is his own words not my words. I was just lucky enough to experience them.

I basically closed down everything, sold what I could, packed my bags and went to the bush.

How long were you there?

On and off for 4 years. I had a family in South Africa so I had to keep travelling between Mozambique and South Africa. I had a lot of responsibilities, a lot of clients that really wanted to deal with me as a consultant. That gave me income.

Why are African medicines the medicine of your choice?

Well, for many reasons. First of all, I was born in Africa. I believe in Africa. African medicines are in reality the most tested and tried medicines in the world.
Let me explain. If we consider that the cradle of mankind is in Africa and the use of herbs is as old as mankind itself, it stands to reason that African medicines are the most tested and tried medicines in the world.
The only problem with African medicines is that the knowledge of their use been passed down between teacher and student orally. So it is an oral art, it is not written down. It was just passed between people. Additionally, very little scientific work has been done on African herbs.
Scientifically speaking, when I started working with the CSIR (Council for Scientific and Industrial Research), it soon came to my attention that when you take an African herb and compare it to its counterpart in Asia, South America or Europe, you find that the African herb generally has a wider diversity of actives, and those actives are more concentrated in the African version.
This is the case with the African Hibiscus. The African Cucumis is another example and so it goes on. There are many examples.
South Africa has many ecosystems and alone has one tenth of the world’s flora (one tenth of the World's Flora occurs in SA). If you look at it, I mean the floral kingdoms such as the one in the Cape, the Savanna, semi deserts and tropical forests, South Africa is very rich. It is abundant in the diversity of plants. What an opportunity! There is much to study!

How many plants are still not investigated fully which could be used by humanity as a medicine or as a supplement?

In reality we have barely started working. There is new information coming out all the time.
Once you start investigating the actives within a plant, all of a sudden there are a few more different uses that come up because the actives don’t lie and we know the actives in that plant have got different uses and applications.
So from one plant, you find many applications and we and science, are finding new applications all the time. For example the African Ginger which is known to have antibiotic activity, which is a lot stronger than the Asian version, has a new patent on it for asthma. There is a new patent. The CSIR has just patented the actives and the methodology how to make the actives useful as a treatment for asthma.
The number of plants range in thousands, approximately 3000 medicinal plants is the estimated number.

How many medicinal plants were given by Africa to the world in your opinion?

Less than 20. We unfortunately are only making use of a few, the very few that help Europeans. For example: Pelargonium sidoids, Devil’s Claw, Helychrysum and Hibiscus. These are the examples that have been widely used throughout Europe, but there are other ones.

Yes, Aloe. Not only in Europe but also in America and Japan.
The Aloe from Africa was planted in Japan. They used it as walls in their gardens. After the Second World War, they used it on radiation patients. The Americans picked it up from there and started their research based on the treatment that the Japanese were using. But the origin is African.
We’ve got a couple of thousand different medicinal plants that could be used and their value as medicine and as nutrition is second to none. If you look at the Momordica Balsamina, it is highly nutritious. It has been investigated by the United Nations as famine food. Taking it one step further, the Baobab is already being exported and there is nothing that compares to the Baobab. These are just two fine examples of the nutritional value that these plants have got in them and what they can offer to mankind.

Out of 3000 medicinal plants less than 20 are used worldwide, so the potential is huge!?

What are the top products which have extremely beneficial effects?

For example, the Chinese are my biggest clients today for the diabetes product. The beautiful thing about this product is it is unlike drugs, it takes away the damage caused by diabetes itself. In other words, diabetes damages and destroys your end organs. These herbs not only bring the sugar level down, but also the damage caused by the disease is minimised and more often than not, reversed. What comes to mind for example is the loss of eyesight. I get a lot of patients that actually were booked for operations, because they were losing their eyesight. They started taking the medication and guess what? All of a sudden they can see properly again. So, that is the beautiful thing about these products.
Another example: if we look at the Chinese again, they suffer from asthma because of the high pollution levels in China. We do not sell many asthma products in South Africa, but we sell a lot overseas.
We have got excellent products. The herbal product for haemorrhoids is very, very good. We have excellent herbal products for high blood pressure, stress, aches and pains. I have already mentioned diabetes. The herbal product for asthma is excellent. The natural antibiotic is second to none and good for immune deficiencies and other conditions like thrush.
In South Africa the most used products are for haemorrhoids and gonorrhoea. That is the South African market. In our neighbouring countries, the product for HIV does well (Namibia, up in Kenya and Mozambique). We have packages leaving for Namibia all the time.

What are the arrangements with the local authorities where the plant is growing?

We have arrangements with everybody in the whole, including some Royals.

And everybody benefits. We are not here to exploit and take away without giving anything back to the community. The community understands that sustainable harvesting creates employment. They stand to gain a lot of foreign exchange.

Herbal Africa's uniqueness lies in its capacity to enhance African herbal medicines with technology and science in order to provide affordable, effective and safe medicines.
CLICK HERE... For more about Herbal Africa products. 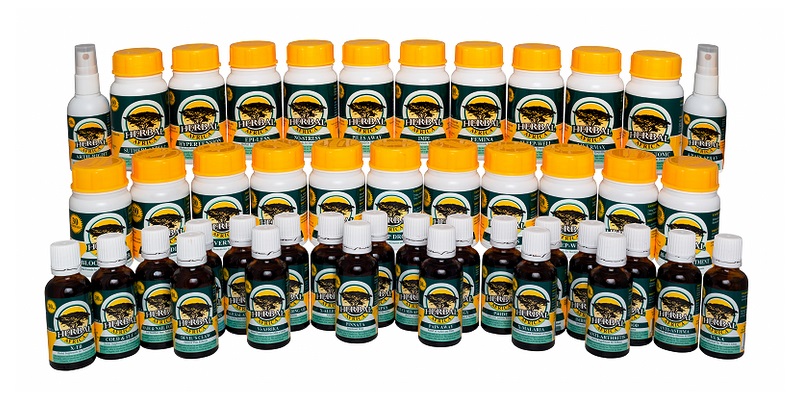